It is used for post-fixation treatment after the use of mercury salts fixatives.

Used directly on fresh sample for the highlighting of intestinal protozoa, eggs or larvae of helmints present in faeces or other materials. Protozoan nuclei and cytoplasmic organelles are brown and therefore more readily identifiable.

Gram staining allows a rapid differentiation of bacteria into Gram-positive and Gram-negative. The structure of the murine of the bacterial walls is the basis of the chromatic affinity. The bacteria will be colored with the Gram Crystal violet-an aniline dye-in the first pass. After treatment with the Gram iodine solution (Lugol), a complex of iodine dye will form. During the decolorization phase, this complex remains in the multilayer structures of the Gram-positive bacteria and will appear blue. Gram-negative bacteria have only a single layer structure of Murura, the dye complex does not remain tied to the cell wall, they will be bleached. Gram-negative bacteria will be counterstained by Gram's safranin and appear orange. 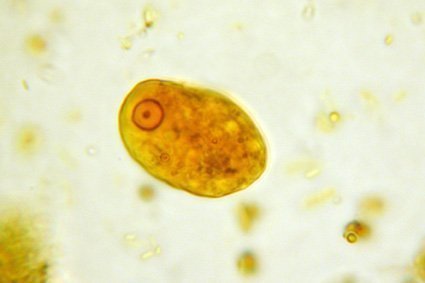 Direct observation is made by preparing a slide by blurring a small amount of material in a drop of physiologic, add a drop of Lugol and put the codon.

P273 do not disperse into the environment.